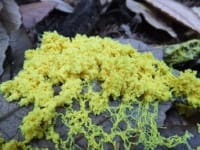 Slime mold can teach you everything you need to know about being an agile, adaptive and responsive company.

OK, maybe not everything, but there are some valuable lessons to take away. That oozing organism can quickly sense, decide and act in response to changes in its environment.  It is no more than a group of amoebae encased in slime, yet they exhibit behaviors that are comparable to those of animals who possess muscles and nerves – that is, simple brains.

These colonies of independent single-celled creatures exchange chemical signals with each other. And, when the chemicals reach a certain threshold of concentration, they act collectively.  This is a change in behavior that comes about not through a planned approach formulated in some dank conference room, but through uncoordinated action, caused only by the environment.

Your Company is Not Slime Mold

Your company may not be slime mold, but there are some important parallels. Like slime mold, we all have the ability to sense, decide and act. But, collectively, humans could take a page from the protoplasm.

In a way, process theories such as the Deming Cycle, the Boyd loop, and Six Sigma are intended to make groups of people (cells) act in coordination and with velocity – similar to the behavior seen in slime mold, but with added rigor.

Many factors can ease the ability to act - to affect change - within an organization. Previous chapters have highlighted the characteristics of an IT environment where change can happen relatively easily: A place where teams operate autonomously within a system architecture that allows individual groups to make mistakes without destroying an entire company.

But the biggest challenges and difficulties -- the things that provide the need for change – are often found outside of the organization. Like slime mold, every organism and organization must go through the cycle of “sense, decide, act.” Whether they follow a formal process like PDCA, OODA, or DMAIC, an ad-hoc process, or no apparent process at all, every entity must integrate input from the environment, make sense of it, and then apply energy as internal and external work.

Their ability to move through that cycle quickly will, in part, determine the long-term health of the organization.

Companies must consider their cycle times - the time it takes to go from sensing to completion of action. Someone must sense that a need exists. Someone must decide that a feature will fit that need and that it is worth doing … and how quickly it’s worth doing. And, then someone must act, building the feature and putting it to market.

“Sensing” and “deciding” happen before the feature ever appears in the development backlog. We usually don’t even track the time these steps take. Once the feature is in the backlog, it can languish for months before the “act” step of building and releasing the feature.

In companies today, there is a time gap – a cycle time – between sensing there’s something wrong with a product or there’s a new business model to go after and, then, actually acting.  Agile, Lean, Kanban … these methodologies improve efficiency and velocity at the ‘act’ stage. Unfortunately, it can take months or years to get through the sensing and deciding stages.

Here’s an illustrative example: think about the last time you visited the bank. Your transaction probably took a minute or two, but your total time inside the building may have been many times that long. Most of your time was likely spent waiting in line for that quick transaction.

That’s queuing time. (And, you know how I feel about queuing issues … take another look at my Team Scale Autonomy post). It’s multiplied exponentially when the players aren’t just a bank customer and a teller, but a development team or an entire corporation.

In reality, most businesses never even reach the level of deliberate action exhibited by slime mold. They are hindered by departmental boundaries, political strife, burdensome project plans, and budget cycles. Unsurprisingly they get many things fundamentally wrong, or terribly late. It’s almost impossible to move teams and systems laterally between business units, divisions or operating companies. And equally difficult to change priorities outside of longer term planning cycles.

So while we’ve gotten better a the act stage, the sensing and deciding stages are where companies are literally failing.

Take Blockbuster, an example I explored in my No Silver Bullet post. In 2004, the movie rental company was booming with 9,000 stores. But just six years later, after facing stiff competition from Netflix and Redbox, the one-time giant filed for bankruptcy.

Here’s what happened: The gap between sensing that there was a fundamental change brewing in the movie rental business, and acting to create its own streaming service took about five years. Most of the time was lost during the sensing and deciding phases. By the time they acted, the once dominant movie-rental company was made virtually obsolete.

Anybody who has worked with an established company knows that a Blockbuster-like timeline is not atypical, even in the face of disruptive change. First, a sufficient number of people have to realize something is going on at all. Then, they have to convince a number of stakeholders that the thing that’s going on is not just a blip, but an existential threat. Then collectively they have to decide what to do about it.

Typically, that sensing and deciding that work is done by a variety of different groups in a company. Each is doing their own uncoordinated, unsynchronized thing. Eventually, someone wins enough mindshare, and that vector of activity becomes the major effort. But, even after the decision is made, it can still take time to go from the drawing board to reality.

As mentioned earlier the annual budgeting process is another hurdle to significant change. Once a decision is made, it takes another year to get the money to enact the decision. A year is a very long gap between sensing and acting.

Product-focused companies are able to act faster because of their organizational structure. They always have people working on new products to offer the marketplace. Because they work on a P&L basis instead of an annual budgeting paradigm, the gap between sensing and acting can be shorter. The product-centric approach increases local control – some decision making – by people who are also responsible for sensing change in the marketplace.  But there is still a need for executive support and alignment with the overall company strategy.

Back to BlockBuster. When the company was faced with the threat of Netflix and the need to move to streaming, there was nobody within the organization to take control. At the macro scale level, there was nobody in charge of making deals to acquire content, leading the software development and creating the devices required to get an app installed on smart TVs. In the c-suite, nobody was leading the charge.

Meanwhile, at Netflix, Reed Hastings, the CEO, had vision. A direction for the company at the macro scale level. He looked at the trends in bandwidth and realized that soon it would be possible to download a movie in less time than it took to watch it. When these trend lines crossed, It would be possible to ship movies around on the Internet instead of sending DVDs by mail.

Netflix’s c-suite provided the strategic direction at the macro scale  level made it possible for developers, at the micro scale level, to prepare for this industry jolting shift. To overcome the departmental, political and other internal barriers to change, Netflix set up a second autonomous development structure in parallel with their legacy organization to attack the new market.

At Blockbuster, that freedom did not exist - but that’s exactly what was required for survival. To stay in business, they needed to give an individual or team sufficient power to get the job done. But that’s easier said than done, as it turns a company’s time-honored processes upside down, takes power away from other people and creates political strife.

Fundamental change, especially at the macro scale level, is tough to accomplish. But, let’s remember, slime mold manages it. Netflix did it. Humans, teams and organizations can, too.

The sensors: organizations need sensory organs - feelers distributed across the company that can sense when change is needed. Big Data and market analysis teams are part of this. So is the customer support team and anybody who takes phone calls from the outside world.

These sensory organs must be connected to people who can make decisions and act on them. Too often, we see data from marketing confined within marketing. We see customer support isolated with no feedback into product development.

There should not be an arbitrary limit to who gets a voice. Early warnings or opportunities can come from anywhere.

The deciders: the people and  groups who make things happen - must have the input from these sensory organs and the authority to effect change. That requires positional authority and a profound knowledge of the entire socio-technical system of the company.

Then, these deciders must be able to shift an organization’s structure, pulling together new teams, technology and leaders from across the company to reflect the new mission.

It is similar to the process of refactoring in the coding realm. We reshape the software so it’s easy to add a new feature. In this case, the deciders reshape the structure of the organization to better respond to the latest business challenge.

Thrashing is what happens when you have action without the time to receive, process and incorporate feedback. You might recognize it as knee-jerk reactions or repetitive fire drills.

Consider a pilot, who sees the nose of a plane go down. He pulls back on the stick, but the nose goes up too far, so he pushes forward on the stick and the plane goes too far down. It’s called Pilot Induced Oscillation or porpoising because it looks like a dolphin going up and down in the water. That happens when the feedback from the environment is slower than the rate at which you’re making changes.

We constantly encourage people to shorten cycle time and to reduce the time between sensing and acting. But be careful not to shorten development cycle time so much that it’s faster than how quickly you get feedback from the environment.

Most companies are not in a situation in which thrashing as described above is the biggest issue. More likely, they have a different problem: still fighting the last war.  In this scenario, responsibilities and leadership hierarchies are based on the previous environment and prior competitors. It’s nearly impossible to restructure an organization in advance of a major strategic effort, but that’s what’s needed if you want to make significant change … and stay in business.

Companies need to prepare in the present for the market war of the future.

Strategic victory emerges not just from the ability to see the need for change, but also the ability to execute in a timely manner. While teams, at the micro scale level, can identify and guide change, it’s always up to the executive leadership to make it possible to happen. Blockbuster didn’t understand this. Hastings at Netflix found a way. You can, too. In the next post I’ll summarize how.