As a Project Coach at Cognitect, I get to work with awesome people. My colleagues are talented, passionate, and -- occasionally -- opinionated people. Along with software and other sorts of engineers we have people with backgrounds in music, physics, radio announcing and mathematics. But we have all found a common purpose here at Cognitect: Our customers. I also get to work with the even more diverse crew we are lucky enough to call our customers. So when I start a project the only thing I can be sure of is that everyone, everyone wants it to succeed.

What goes into a successful software project? We’ve all seen teams of great people tackle hard technical problems and triumph. Sadly, if you’ve been in the software business any length of time, you have also seen teams of great people stumble. At Cognitect we believe that software projects are mainly about people. Look around at the industry today and you can find hard technical problems, problems that can defeat even the brightest. But much more often project failures are people failures. Way more systems had been brought down by mismatched expectations and personality conflicts than by off-by-one errors or dueling library versions.

If pulling off a successful software project is all about people, then you need to pay attention to the people issues all through the project. Sadly that’s not how it usually is: Projects usually get much more attention in the middle and at the end than they do in the beginning. It’s only human nature: At the beginning of a project, the deadline is as far away as it ever will be. At the start people are generally relaxed, looking forward to a new challenge. It’s usually in the middle when commitments and decisions have been made and the pages are flying off the calendar that we tend to sit up and take notice. But after 23 years of running or coaching projects, I can tell you that the beginning of a project is when you have your biggest opportunity to put your project on the right path.

Before the Project Kick-Off

Who should participate in the project kick-off? Obviously, the people who are going to do the work, the developers, designers, architects and anyone else who is going to pitch in should all be there. But you have to cast your net wider than just the people doing the work. You need to ask the key question: Cui bono? Who benefits? Who are you doing this project for? And you have to follow the money. Who is paying? A project kick-off meeting cannot be productive without all the stakeholders and the project sponsor’s participation. Getting all the key players in a room together can be a pain, but if you can’t pull everyone together you may as well vote on the code name while you wait for the pizza.

Notice that I keep saying participate, not attend. Have you ever been in a meeting where a key stakeholder is “attending” the meeting but isn’t really fully participating or even paying attention? I have, and it’s frustrating and disrespectful. Worst of all it’s distracting, distracting to the folks who are really involved.

At Cognitect, we start our projects with Iteration Zero or I-0 for short. We call it iteration zero because it’s the iteration before the first “real” iteration. The first day of i-0 is the project kick-off meeting. After that, the i-0 activity focuses on learning about the project and business needs, technical details, and the beginnings of a project plan. A typical i-0 lasts two to four days, though we have done them in as little as one day for a small, straightforward project and had one stretch over two weeks for a massive effort.

The critical thing on that first day is to make sure the project goals, values, and motivations are clear to everyone. The whole point is to facilitate good conversations and get everyone participating. I use the classic talking stick technique to make sure that everyone has a say and that no one person (and I’m looking at you, Senior Executive Manager and Chief Architect) dominates the conversation. To get to this shared understanding, I use the three project framework exercises. I borrowed these exercises from Doug DeCarlo many years ago. I was lucky enough to work with Doug -- the author of eXtreme Project Management -- some years ago. Doug was a mentor to me and in the years since I’ve tweaked the exercises to fit my needs. 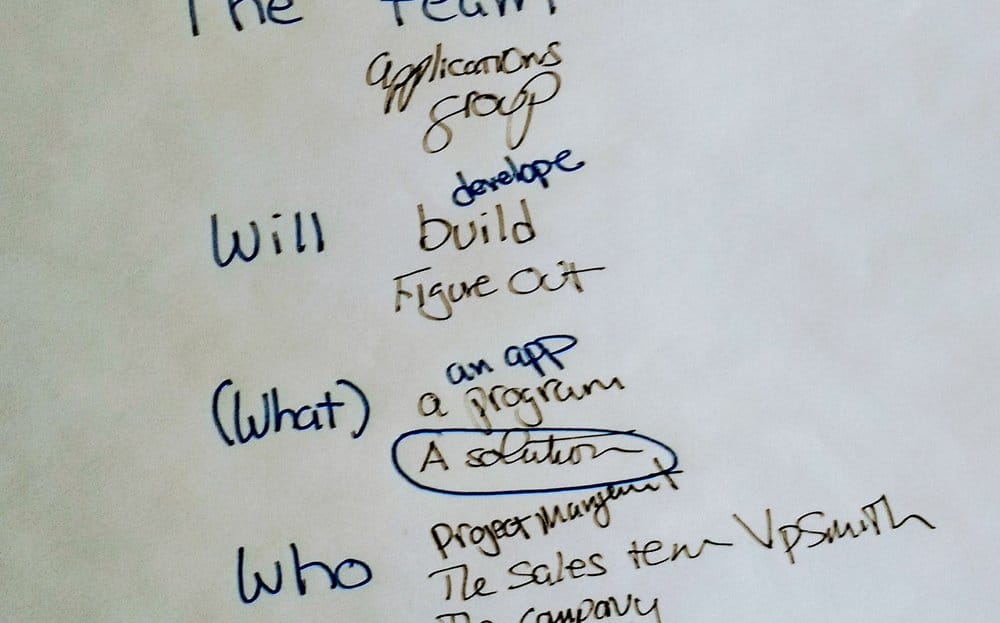 Exercise 1: Who is doing what for whom?

The first exercise seems very simple: It starts with this incomplete sentence:

The goal is to fill in the blanks and come up with a one-line description of the project. Kick things off by asking everyone to take a few minutes to come up with their own replacements for the <Who>, <Do>, <What> and the <Whom>.

For example, one version of the finished sentence might be:

Don’t be surprised at how many versions of the sentence your team produces -- it’s just a starting point. The next step is to get the team to agree on a single version of the sentence. Teams often have the most trouble filling in the <Whom>, but I have seen people struggle over every single word of this simple sentence. But if the project is to succeed we need to know who is doing what for whom. Again, don’t let any one person dictate: This should be a team discussion. 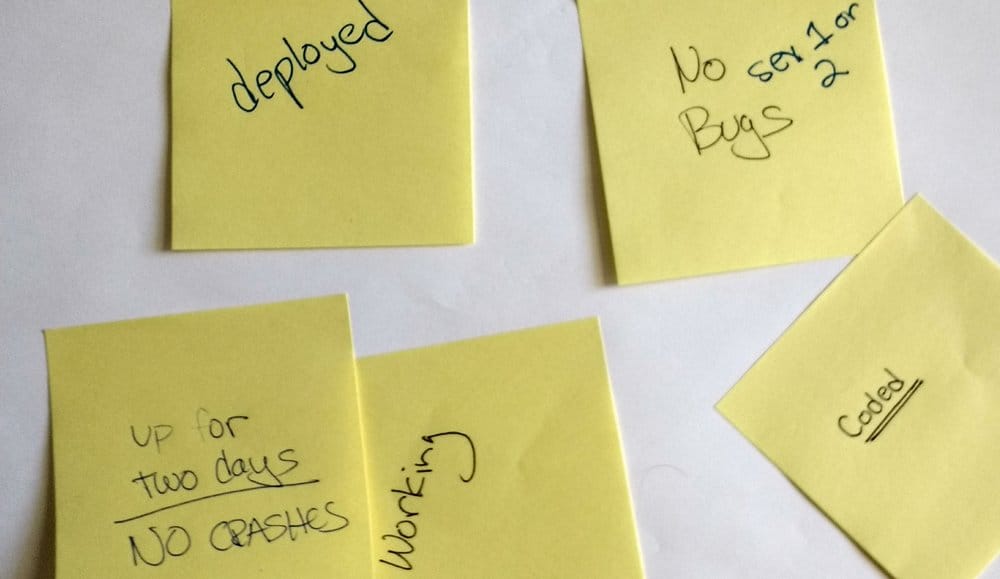 Exercise 2. The project will be complete when….

The goal of the second exercise is to complete the following sentence:

The project will be complete when…

The idea here is not to list all of the features, tasks, and requirements. Instead, focus on the top-level goals, summed up in two to five bullet points. Something like this:

Again, work on sentences as a team, and drive towards team consensus. Emphasize that these criteria are important: When there is a check mark next to all the items, you are done. Or to put it another way, the project isn’t done until that last item is checked off. 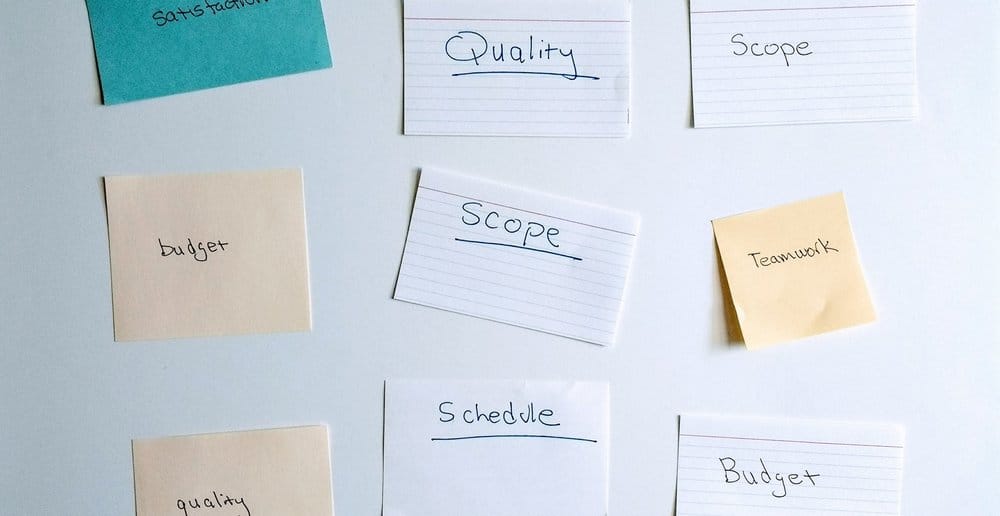 We’ve done fill-in-the-blank and complete-the-sentence so it must be time for a multiple choice question.: Here’s a list of things we would like to get from our project:

The point of the exercise is to focus everyone’s mind on what will make the project a success.

The universal first reaction to this exercise is I choose all of the above. Sadly, there are times when we need to choose, say budget over scope or scope over schedule. Nobody wants to build a system that is behind schedule or lacks important features. As we work on the project we will do our absolute best to ensure it is as good as it can be in every possible way. But in every project I’ve ever been involved in, there has been at least one moment where we have had to choose. And at those moments you need to know what is important. By getting the What’s More Important? discussion out on the table right at the beginning, we won’t find ourselves improvising an answer two days before the deadline.

An equally important goal is to make sure that everyone understands what each of the win conditions means. Sue’s definition of budget might mean within 10% our estimate while Carol’s might mean absolutely no more than $50K. Bob might think that hitting the scope goal means getting the minimum viable product up and running in the lab, while his boss might think scope means all of the features deployed on the corporate cloud. Before you walk out of the room on that first day, make sure the team agrees on what three most important win conditions are and what they mean.

At one of my previous jobs, I joined a team that was already three months into their project. One of the first things I did was run the win condition exercise. The team chose the following:

That afternoon I asked the project sponsor, who hadn’t attended the first meeting, to pick her top three win conditions. Her list was this:

Notice that while the rest of the team thought that schedule was the most important thing, it didn’t even make the sponsor’s top three. Good thing you worked that weekend…

But the differences didn’t stop there: To the team, Scope meant this:

We must stick to the feature & functional requirements as defined.

To the project sponsor, Scope -- her top priority-- meant this:

The requirements are changing all the time, and so we need to keep track of them accurately and adjust accordingly.

Once this all came to light, the team realized for the first time that the scope can and is expected to change throughout the project. Something you might want to know.

This example also shows how important it is to check in on the results of the exercises while the project is going on. If the landscape has changed, it’s important to note that, adjust the project framework, and communicate the changes to ensure everyone involved remains on the same page.

A Framework for Success

As you can see the focus of the project framework exercises is on the people first, and the other aspects of the project second. The exercises trigger important conversations, realizations, and lead to a shared understanding. They get people asking questions and talking through issues that might otherwise not come up until it is too late, if at all.